We know what to look for

Periodontal (gum) disease including gingivitis and periodontitis are infections of the gum and bone surrounding the tooth roots, which if left untreated can lead to loosening of the teeth within the jawbone and eventually tooth loss.

Gum disease is caused by a build up of plaque, a colourless sticky layer of bacteria that build up on the tooth surface, eventually making their way under the gum line, which results in inflammation of the gums, as your immune system fights to control the bacteria. The bacteria themselves also directly irritate the gums by releasing toxins.

Hundreds of bacteria live in the mouth, so controlling the plaque build up is a constant battle. This is why daily brushing and flossing is so important.

Teeth are supported by the gums. A tooth’s root is anchored to the socket by fibres called the periodontal ligament. The gums are not tightly attached to the teeth. 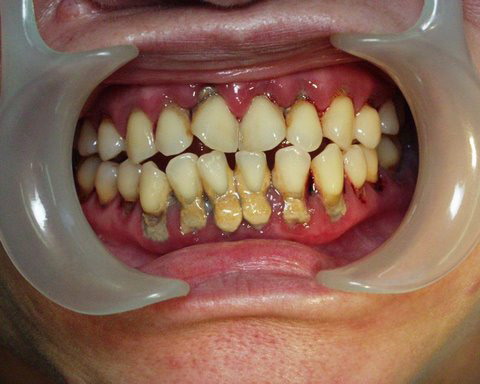 Answers to your Questions

How do I know if I have periodontal disease?

Most people don’t know they have gum disease until its advanced. Symptoms may include:

Any of these problems may signal a serious problem and should be checked by a Periodontist/dentist or hygienist.

At your visit you will be asked about your medical history to identify underlying conditions or risk factors (such as smoking) that may increase your risk of periodontal disease.

X-Rays may be taken to check for bone loss.

How is periodontal disease treated?

The main aim of treatment is to control the infection. The bacteria (plaque) is removed from the root surface of the tooth using hand instruments that are used to gently scrape plaque and tartar from the tooth. Ultrasonic instruments are also used to help remove bacterial deposits from the teeth. This is called Scaling and Root-Planing. Immaculate home care (brushing and flossing) is essential if treatment is to be successful, otherwise pockets will quickly become re-infected with plaque and the disease process will start again.

What is “Flap Surgery”?

Flap Surgery may be necessary if inflammation and deep pockets remain following treatment with scaling and root-planing. A periodontist performs flap surgery to access bacterial deposits and tartar that have not been able to be removed by non-surgical treatment (scaling and root-planing). Surgery involves gently lifting back the gums for deep cleaning. The gums are then sutured back into place to fit snugly back against the tooth.

The aim of the surgery is to reduce the pocket depth by healing of the gum tissue back against the cleaned tooth root. Pocket depth reduction also occurs as a result of a reduction in inflammation. Once the pocket is at a reduced depth, it is easier for the patient and hygienist/periodontist to keep the tooth clean and therefore reduce the chance of recurrence of the active gum disease.

What are “Bone and Tissue Grafts”?

Where can I find out more info?

The American Academy of Periodontology (AAP) has even more information available. Just click on the link: www.perio.org

Smokers are 2-7 times more likely to develop gum disease than non-smokers because of a dulled immune response.

Diabetes also increases the risk of gum disease by 2-3 times. If a person’s blood sugar level is poorly controlled, a worse infection, poor healing and an increased loss of bone is likely.

Stress increases certain hormones that can affect your gums and make a person more susceptible to infection.

Pregnancy and birth control pills affect hormone levels and can have an affect on the gums with increased bleeding of the gums being a common sign.

Blood pressure medications, anti-seizure medicines and steroids such as cortisone can all affect the gums, often making them appear swollen and inflamed.

Periodontal disease runs in the family

There are two types of gum disease, gingivitis and periodontitis

The longer that plaque remains on the teeth, the more harmful it becomes. The bacteria cause inflammation of the gums that is called gingivitis. The gums become red, swollen and can bleed easily. Gingivitis is a mild form of periodontal disease that can usually be reversed with daily brushing and flossing and regular cleaning by a periodontist, dentist or dental hygienist. This type of gum disease does not result in any loss of bone or tissue that holds the teeth in the jaw.

Cigarette smoking is a risk factor for many diseases and periodontal disease is no exception. In fact smoking and gum disease shows the strongest relationship of any disease including heart disease and lung cancer, with smokers up to seven times more likely to have gum disease, than non-smokers. Periodontitis is less severe in former smokers, providing evidence that giving up smoking is beneficial.

Diabetes increases both the risk of severe periodontitis and the progression of periodontitis by 2-3-fold. Poor diabetic control results in more bone loss than patients without diabetes. However studies support the fact that well controlled diabetics respond just as well to treatment as non-diabetics.

A more accurate cost can be discussed during your initial consultation.

Make an appointment for your mouth

Book an appointment today and start to feel happy about your mouth again.
Book today